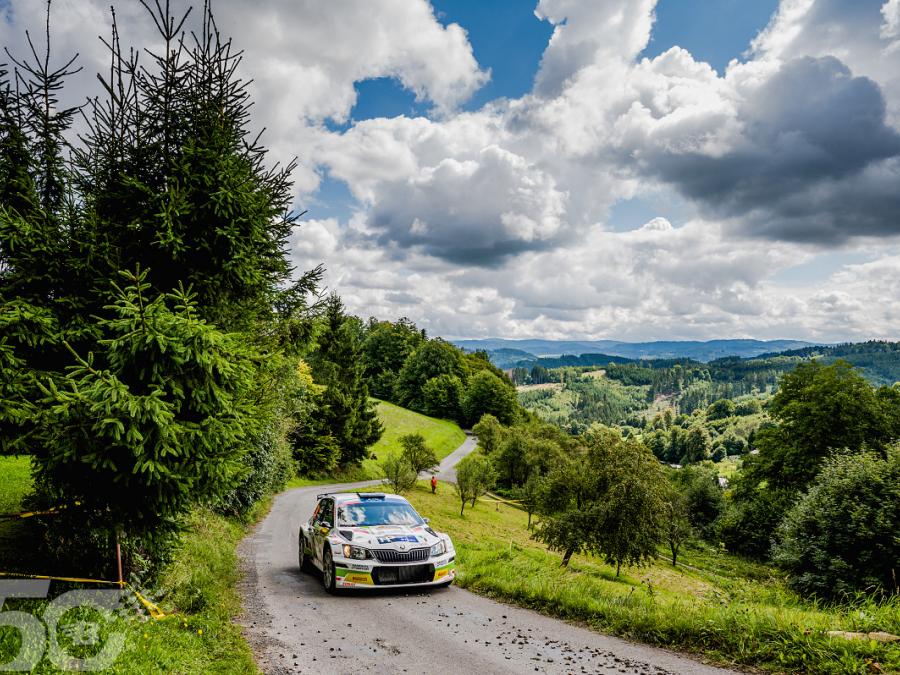 Jan Kopecký / Jan Hlousek (Skoda Fabia Rally2 Evo) won the Barum Czech Rally Zlin 2021 for the 9th time. After an unexpected competition from the Czech driver Erik Cais / J. Zakova (Czech Republic) (Ford Fiesta R5 MKII), Kopecky finally won again in the biggest Czech rally.
The short sections did not make much difference, but when reaching CE12 Májová (25.43 km) Erik Cais / J. Zakova gained a lead of 13.0 seconds ahead of Kopecky for the stage and led convincingly with 20.4 seconds. Kopecky commented that he made a few mistakes while Andreas Mikkelsen / Jonas Andresson lost 21.0 seconds in the stage, but as Mikkelsen says, the local boys know the ways. However, the goal of Andreas Mikkelsen is the championship, where Kopecky or the other local drivers do not participate.
In the penultimate stage, Kopecky was 20.2 seconds behind Erik Cais. He himself was afraid of the coming rain due to the lack of suitable wet tires. At the same time, Mikkelsen returned the gas and the goal was to finish, not worrying about third place.
In the last final stage, however, in the 25 km long stage, Erik Cais / J. Zakova made a mistake and crashed. So really at the last minute they gave the victory to Kopecký / Jan Hlousek.
Kopecky is already thinking about Rally Zlin 2022, promising to take part.
The winners Kopecký / Jan Hlousek (Skoda Fabia Rally2 Evo) have a time of 2: 00: 07.2. In second place are Mikkelsen / Jonas Andresson (Skoda Fabia Rally2), who tactically managed to carry out exactly their plan and topped the standings in the championship, a very decisive moment that puts them as the biggest favorites for the title in the European Rally Championship.
Third place is for Filip Mares / Radovan Bucha (Czech) (Skoda Fabia Rally2 Evo) +1: 40.2. The first six places in the general classification are crews with Skoda Fabia cars.
Only 3.8 seconds were left for the Hungarians Norbert Herczig / Ramon Ferencz for a place on the podium.
The next rally in the championship is the Azores Rally on September 16-18.

The expected battle between Jan Kopecký / Jan Hlousek (Skoda Fabia Rally2 Evo) and Andreas Mikkelsen / Jonas Andresson (Skoda Fabia Rally2) started from the first speed stage.
However, Vaclav Pech / Petr Uhel (Ford Focus WRC) came as a surprise, coming out on top after the second speed stage. Kopecky managed to gain an 8-second lead over Mikkelsen before the first service park of the day. A small mistake by Vaclav Pech in the fifth stage sent them to 3rd place, and the differences remained extremely small.
Before the second service park on Saturday, the crew of Erik Cais / J. Zakova (Czech Republic) (Ford Fiesta R5 MKII) managed to reach the second place only 0.8 seconds after Jan Kopecký / Jan Hlousek.
Andreas Mikkelsen / Jonas Andresson finished third in 6.9 seconds. The Austrian Simon Wagner / Geralnd Winter (Skoda Fabia Rally 2) are fourth but already with a serious difference of 39.9 seconds.
At the end of the day, however, Erik Cais / J. Zakova (Czech Republic) (Ford Fiesta R5 MKII) took the lead with a time of 1: 13: 41.0. Jan Kopecký / Jan Hlousek (Skoda Fabia Rally2 Evo) are second in just 2.1 seconds. Third are Andreas Mikkelsen / Jonas Andresson (Skoda Fabia Rally2) in 16.6 seconds.
In some places along the routes there is mud thrown away and it is wet on some bends. The notes for today's sections are extremely important. As Kopecky requests you have to take risks for the best time.
Extremely happy was the driver after today Erik Cais, who thanked his father for his support.
Fortunately, today the weather was better than expected with mostly dry routes.
On Sunday Barum Czech Rally Zlin 2021 continues with 6 new sections.

rally, barum, zlin, 2021, shakedown
The summer in the center of Europe is over and racers and fans will watch the rally in cold and rain.

The summer in the center of Europe is over and racers and fans will watch the rally in cold and rain.
The expectations are for more rain, cold and cloudy weather.
Electric cars part of the German championship ADAC OPEL e-RALLY CUP will take part in Rally Barum Zlin.
In Shakedown today, the expected best time was achieved by Jan Kopecy / B. Rendlova (Ford Fiesta R5) with a time of 2:49.90. 1.5 seconds behind them are V. Cvrcek / Ondrej Salek (Skoda Fabia R5).
The main competitors of the Czech crew Andreas Mikkelsen andAlexey Lukyanuk did not take part.
After a while the super special stage begins.
In the classification stage, however, Andreas Mikkelsen / Jonas Andresson (Skoda Fabia) scored for the first time with a time of 2:34.711. Jan Kopecy is third in 0.53 sec.